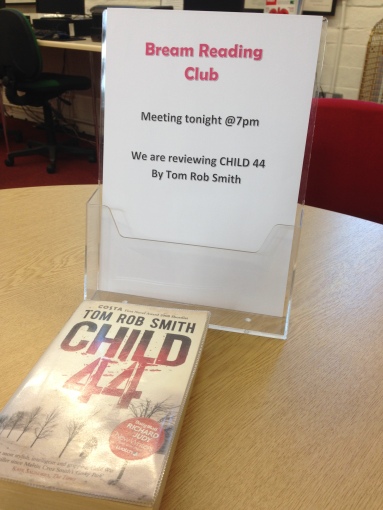 We all agreed that it was a very intense book and for those of us who weren’t fully aware of what it was like to live in Stalinist Russia during that time our eyes were surely opened!

This book takes you through the transformation of Leo Demidov from a complete ‘company man’ of the Russian State to a real person listening to his own sense of right and wrong.  We meet him as a no nonsense officer of the MGB willing and able to follow through on his orders and completely committed to succeeding. We also get glimpses of his insecurity because no one is safe under the scrutiny of the State. He is very aware of this and the long running jealousy of Vasily is a constant reminder of how much someone hates him and desperately wishes and works towards his downfall. From the beginning the life of Leo is shown for the stark reality it is. There is no happy family man here, or even a happy career man, it is purely survival in a very structured and dangerous place.

The relationship between Leo and his wife Raisa is another that is deep, raw and completely honest. Their relationship ebbs and flows according to the State plan, but the book takes a serious turn when Leo is faced with the decision of denouncing his wife. Seeing into their marriage is like facing a needed surgery, the inevitable pain is necessary to start the way to healing. Raisa is the stronger character in my view, never losing her sense of humanity but knowing how to hide herself in order to survive.

Leo’s decision starts a chain of events that leads to him discovering that murders are occurring the breadth of Russia, and since there is no crime in Russia he is the only one trying to convince anyone of the scary reality that a serial child killer/s is on the loose.  His commitment to this brings further scrutiny on him and he feels the full force of the authorities and experiences a complete reversal of circumstances. Where he was the one arresting people and transporting them to the most notorious prison Lubyanka, he is now the one in the prisoners seat.

There are twists and turns in this book that will knock the breath out of you. A seriously brilliant book.

On a personal note I found this book hit too close to home in regards to my own upbringing in the Jehovah’s Witnesses. Where Leo is hitting his head against a stone wall in trying to convince people of the danger they are ignoring, it reminded me very strongly of how difficult it is to convince or motivate the Governing Body of Jehovah’s Witnesses and the Congregation Elders that the right thing to do when an accusation of child abuse comes to them is to immediately call the authorities. They instead stick to their own procedures in the face of irrefutable evidence and demonstrated experience that their procedures are dead wrong and need to be changed, they still refuse to listen and insist that their way of doing things is right and everyone else must be wrong.  They desperately work to keep their image clean just like the Russian Government insists that the State is always right. Thankfully there is an army of people worldwide working incredibly hard to expose there hurtful practices and in so doing protect the public from being sucked into this so called religion.

Volunteers at the library

Just type 'Gloucestershire Libraries' in your app store. - Renew or request a book or eBook on the move - Download an eMagazi - Check events and more!